Rony Abovitz Founder, President & CEO October 20, 2015: Just as the dust was settling down around Facebook’s Oculus Rift, Google’s Cardboard, and the virtual reality paraphernalia, a video took the internet by storm. The demo went viral within hours, as technology enthusiasts and casual web surfers alike were enthralled at the sight of what was for long hidden beneath the veils of secrecy. The scene opens with a regular unembellished office setting, but just as the viewer gets accustomed to that fact, an outlandish apparition materializes within the range of vision: A robotic life-semblance waves its minuscule digits from under a work desk as if it was delighted at the sight of a visitor. Just when the viewer realizes that this is the work of Augmented Reality (AR), the view pans out, revealing a real table obstructing a portion of the robot!

In what could easily be mistaken for another simulated video, the creator of it—a startup called Magic Leap—debunked the public’s notion with the fact that it was something beyond the bounds of normal AR. The stage was set and Magic Leap’s proclamation on YouTube had inevitably set the wheels in motion, blending the realms of VR and AR.

Set in a tropical Florida backdrop—not Silicon Valley, not Chicago—Magic Leap’s office is far from any regular tech startup. Founded by Rony Abovitz in 2011, who previously co-founded and sold a robotic-surgical technology company for $1.65Billion, Magic Leap was conceived to produce graphic novels and feature films under the banner ‘Magic Leap Studios’. Very soon, Abovitz realized his true calling toward the company’s current stature and stand on what is believed to be an evolved era of augmented reality. Since then, the company has been working incognito on a head-mounted virtual retinal display prototype that overlays superimposed Computer Generated (CG) imagery over real world objects and sceneries. Creative teams at Magic Leap—who go by the name ‘leapers’—envelope a line-up of robotics scientists, filmmakers, software engineers, science fiction authors, special effects experts, gaming designers, and programmers.

Magic Leap recently made headlines when the company pulled off, what could be one of the biggest C-round of investments in the history of tech startups. Right from the heart of Silicon Valley, Google had pooled in a sum of $542Million, with CEO Sundar Pichai shortly joining Magic Leap’s advisory board. Having raked in dollars from other investors such as Alibaba Group, Qualcomm, and venture capitalists including Andreessen Horowitz and Kleiner Perkins, the company's net worth is estimated today at $4.5Billion.

You're not challenging actual physics, but people's notions of physics

Despite Magic Leap’s initial claims on its avant-garde product diverging from the augmented reality technology, it is safe to assume that the essence of the project takes its roots from AR. Earlier demonstrations (videos on YouTube) from the company had instigated wild speculations, giving the public a hard time grasping the veracity and its endless possibilities. Compiled on a large part out of computer-generated content, the older videos contained simulations of how the product could evolve in due course of time. However, the footage with the robot is very different on a number of counts. Firstly, it was shot directly with the actual technology—a very early and developmental prototype, yet it is the real deal—as stated by Magic Leap. Secondly, it had broken the cloud of pandemic delusion that it had something more to do with, than the average augmented reality techniques.

There was a time where no clear line of demarcation distinguished augmented reality from virtual reality and more frequently, its recent relative, the Mixed Reality. It was Microsoft that began scrapping the surface, flaunting the terminology ‘mixed reality’, when it took center stage to promote the Hololens headgear. Gradually, others like Atheer, and Loook—the most recent Seattle-based holographic mixed reality startup—followed the hot trails. But, Magic Leap ascension into the limelight— thanks to the demo—is a promise for a more accurate and perfected technology that tricks the human brain into attesting the authenticity of the fabricated world it perceives. The technology powering Magic Leap seems to be “challenging the perceived notion of physics,” in the words of Abovitz. “You're not challenging actual physics, but people's notions of physics.”

With Magic Leap still holding its cards close to the chest, the curiosity among technology enthusiasts and scientists has only been escalating. For a long time, neither the company nor Abovitz had revealed the actual engineering behind its head-mounted display. However, a patent filed by Abovitz on May 16, 2013 took its share of surfacing the internet, with many professionals offering their views and opining about the plausible direction of Magic Leap’s study. One such theory offered by Gordon Wetzstein who heads the Computational Imaging Research Group at Stanford University states that when a viewer perceives a 3-D scene, the depth at which eyes focus changes variably with objects at different distances. Magic Leap’s patent proposes an unconventional approach, where their design prototype mimics the 3-D patterns of light rays—termed “light fields”—that our eyes consume from the real objects and scenes.
The human brain takes care of the rest, says Tom Simonite for MIT Technology Review. It instructs the eyes to identify the varying depths of the 3-D scene in a similar fashion to that of the real world, rendering a more justifiable illusion of virtual objects merged with the real world.

"A few awkward steps for me, a magic leap for mankind"

Magic Leap’s proprietary technology, unlike traditional display gear that projects imagery onto a head-mounted display, projects the scenes directly into the human retina. In what could be the first successful mass production of its kind, the retinal projection technology is known as Dynamic Digitized Lightfield Signal. Creating more curiosity, the company had stated that it will be designing a wearable device that cohesively incorporates, “hardware, software, sensors, core processors, and a few things that just need to remain a mystery.” Richard Taylor, the Co-founder at Weta Workshop and a member on Magic Leap’s Board of Directors assures, “We are now at the threshold of giving people a dynamic image interface that harmonizes with their senses in a completely natural way.” Magic Leap has also responded to the dubious look on everyone’s faces when they hear that the technology will be generating imagery directly onto the human brain. “Our philosophy as a company is to leave no footprints in the brain,” Abovitz adds. “The brain is very neuroplastic,” says the CEO. There is no way that any near eye stereoscopic 3-D system would cause neurologic change.

Once Magic Leap stacks the shelf with its compelling technology, it is expected to add a new dimension toward the status-quo of civilization. The entertainment industry— predictably the early adopters—will soon be offering more immersive movie experiences. Retailers and other Point of Sales (POS) businesses can setup futuristic and interactive gear and wearables that overlay virtual imagery of trial rooms luring more prospective customers. We are not very far from an ultra-sophisticated healthcare experience, where surgeries can be performed with the guidance of 3D projections and models. Video conferencing will not be the same anymore, with callers being able to convene in a simulated environment. According to a recent report, the Total Addressable Market (TAM) for AR and VR combined, will touch $150Billion by 2020.

With Google Glass toiling at countering the much-debated altercations it faced with several regulatory and activist motions, and Microsoft Hololens hitting the shelves anytime, Abovitz’s team of ‘leapers’ may have taken a flat pace. But, the backing it has earned among supporters like Google has only propelled Magic Leap’s tempo and the promise it holds. As Abovitz had remarked at a TED conference, “A few awkward steps for me, a magic leap for mankind.” Come what may, humankind has already embarked on its momentous leap towards Magic. Not very far in the future, a day may come, when the bracket of realities—virtual, augmented, and mixed—will become the norms across every path of life. 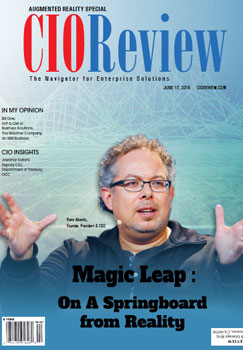