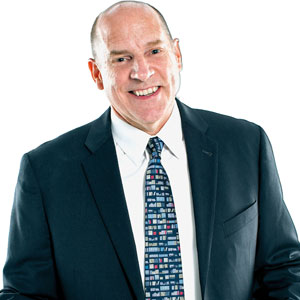 Ken Ehrhart, Founder & CEO Stanley G. Weinbaum, in 1935, weaved his magical words to merge the world of dreams and the real life. In his short story, “Pygmalion’s Spectacles,” Weinbaum took the readers to a world where they speak to the shadows. This could be possible only in the world of ‘Paracosma— Land beyond the world,’ which Weinbaum created 83 years ago. Fast forward to 2018, Weinbaum’s imaginary world has turned into a reality, and it is popularly known as augmented and virtual reality (AR/ VR). In other words, AR/VR technologies have recreated the ‘Paracosma’ world. As these technologies present a promising future with limitless possibilities across industries, including entertainment, they are gaining tremendous momentum with investors pouring significant funding to accelerate AR/VR innovation. That said, these technologies are still in their infancy, and there is a huge challenge around the integration aspect of these tools and technologies which could put investments in jeopardy. The need of the hour is a suite of technologies which not only works across platforms but is also cost-effective. With a perfect mix of a suite of inventive AR/ VR technologies and the expertise in the related fields including photogrammetry and 3600 media, Paracosma fits the bill. “Having a unique business strategy that keeps the cost at a minimum in developing cutting-edge immersive technologies, we are perfectly aligned with the market developments and are ably positioned to lead the AR/VR industry,” says Ken Ehrhart, Founder & CEO, Paracosma. In today’s rapidly evolving AR/VR ecosystem, Paracosma strives to remain platform agnostic by working with diverse platforms such as Oculus, Sony, Snapchat, and AR Studio.

From the outset, our approach has been to not just respond to the clients’ immediate requirement but to ensure that our efforts prove fruitful in the area of training the workforce and enhancing skills

Eponymous to Weinbaum’s world, Ehrhart’s company, Paracosma is an initiative focused on inexpensive AR/ VR content creation, technology innovation, content delivery platform development, and system integration. “From the outset, our approach has been to not just respond to the clients’ immediate requirement but to ensure that our efforts prove fruitful in the area of training the workforce and enhancing skills,” says Ehrhart. He cites an example of their upcoming sandbox VR game designed primarily for consumers which will be launched within a couple of months. The game leads the users into a mansion with 18 rooms, and each room has distinct mini-games for them to explore. “Through this game, we aim to create interactive sessions that are suitable for enterprise training and skills development,” adds Ehrhart. For instance, users can learn how to stock shelves in the storeroom and move products around in a production environment. The VR-based gaming experience encompasses different interactions an enterprise would need for training an assembly line or industrial process or initiating a tour in the office.
Impressed by its potential, a retail organization is already brainstorming ideas with Paracosma to develop a VR-based solution for their business.

With fast-paced innovation in the VR industry, Ehrhart opines that its use cases will expand to various sectors, one among them being the tourism industry, especially pilgrimage, which presents a long-term market opportunity. Paracosma is currently developing models of actual locations using photogrammetry to be used in interactive VR. In fact, the company has already developed a detailed VR model of one of Hinduism’s holiest sites, the Pashupatinath Temple in Kathmandu, and is currently working on a similar project to create models for Lumbini, which is considered the birthplace of Lord Buddha. A virtual tour of Lumbini will provide billions of Buddhists from around the world an opportunity for the virtual pilgrimage through tablets or smartphones, with an increased level of interactivity. “Such undertakings besides enhancing our skills and VR capability have also opened numerous doors of opportunities for us,” says Ehrhart. For instance, Paracosma’s Pashupatinath Temple’s model has caught the attention of a Hollywood studio that has approached them to build models of their film sets, allowing the studio to do interactive works.

“It is an extension of our capability, and it is easy for us,” says Ehrhart. As Paracosma operates at an extremely low cost and yet incredibly high-value development center and research lab in Kathmandu, Nepal, the company makes leveraging the technology an easy task. The low per capita GDP of Nepal compared to that of developed countries is a unique advantage in the AR/VR space. Ehrhart admits that the AR/VR industry being relatively new, it is difficult to find a workforce with 10 to 20 years of experience. Therefore, the company hires talented young graduates in Nepal and trains them in-house to simultaneously advance with the industry. Paracosma’s premise is to create a broad skill set at a low-cost for investment and growth that matches the market within the timeline. “We are aiming to be ready for the market in the coming three to five years when VR and AR will be fully enabled on every smartphone,” says Ehrhart.

Affiliated with an Internet video company in Japan—which Ehrhart invested in as a venture capitalist—Parcosma has an added advantage to leverage the Internet video company’s platform that serves over 3 million end users, 200 live channels and video on demand on several mobile carriers. Paracosma is adding 3600 media input and output to that platform to create its own 3600 media distribution platform named Paracosma TV. As an advocate of 3600 media, the company is also extending its capabilities to a mountaineering guide service, Madison Mountaineering, which is a pioneer of VR and 3600 video filming and production.
Having one of the biggest libraries of immersive 3600 media content, Madison had difficulties in distributing the content cost-effectively and the continued high cost of the post-production work of stitching and editing. Paracosma has built a white-label 3600 media distribution platform, which will be launched with Madison Mountaineering. The platform will enable them to share their volumes of 3600 content as well as provide their client a private and secure platform to share their media content from Madison expeditions. In addition to the 3600 media distribution platform, the company will support Madison’s ongoing post-production work, both on content for that site as well as anticipated collaboration in other projects. “We focus on integrating different media formats, platforms, and accessibility across different devices for 3600 media,” says Ehrhart.

VR on one side, Paracosma has expertise in the area of AR as well. The company is always focused on aligning with the latest and the greatest in the field of AR. With such aptitude, they have charted several success stories. Ehrhart cites an instance with a global manufacturing partner, with over two-dozen different types machines and more than a hundred plants around the world who approached Paracosma for an AR application that could guide users in their machine maintenance and training. Paracosma developed an AR application for them by taking the 3D models of the machine and superimposing them on the actual physical space to provide navigation guides and timeline checklist for the maintenance of the machines. The client now was able to guide the workers through those steps without shutting down the assembly line or halting the work. Paracosma is undertaking various other exciting AR integrations for clients from various industries, including aerospace, e-commerce, and the hotel industry.

With rich experience in assisting U.S. enterprise software companies to expand into Japanese markets through subsidiary companies, Ehrhart fully understands the requirements of the enterprise market both in the U.S. and Japan. With such experience, Ehrhart is leading Paracosma to work with some of the leading American AR and VR companies that are targeting the Japanese market. Ehrhart says that Japan being home to approximately 14,000 gaming arcades which are looking to integrate AR and VR technology, presents huge revenue opportunities. “Combining my knowledge of the Japanese market with Paracosma’s on-the-ground capability, low-cost business strategy, and inventive technology, we are favorably positioned to help companies with consultation and technical support to expand into the Japanese market,” says Ehrhart.

An enormous amount of opportunities are emerging in the AR/VR space for Paracosma, where various companies that began with traditional approaches now require their help to stay ahead in the competition. Paracosma is currently in talks with two such companies to buy their legacy VR game and redevelop those as a second generation game with intuitive AR/VR technologies. For Ehrhart, taking advantage of the market dynamics is a growth strategy to potentially expand in Europe and further in North America. With the scope to cover this space by improving skills, Paracosma is aptly positioned to push the boundaries of AR/ VR’s innovation sphere. 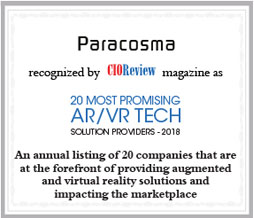